This post is about two distinct artists of the early Twentieth Century, Maria Jeritza and Amelita Galli-Curci.

These two ladies both advised the same approach in learning to sing: DO NOT force the breath or overfill the mechanism with air!

While Jeritza sang more dramatic music, her approach was lyrical in nature and in line with the more Italianate training of her time. Additionally, Amelita Galli-Curci, whose repertoire was mainly coloratura bel canto (although she also sang Butterfly and Leonora in Trovatore!), also had a similar technique (sound familiar?) in using her breath as a source of energy and not a brute force.

Jeritza was a celebrated Moravian soprano who worked with Puccini and Richard Strauss. She created the role of Ariadne in Ariadne auf Naxos and the Empress in his opera Die Frau ohne Schatten, and was the FIRST Turandot in America.

She had a wide repertoire that included all types and style of opera.

Of her training she remarked:

…at twelve I was attending the Musikschule in Brunn. There, aside from regular class instruction, Professor Krejci gave me private lessons twice a week. I think myself that I had a good, clear voice when a child…Krejci was even then convinced that I had a future, and taught me with the greatest care.

He taught me one very important thing right at the start, something which every student should realize – not to scream, and not to force my voice. It is a lesson every vocal student should take to heart, for the habit of screaming and forcing the tone, if developed when the voice is forming, and persisted in, has ruinous consequences.

At 1:14 – Listen for how she takes the HIGH tones! That sound at 1:14 is PURE HEAD VOICE. This was the way that all women trained in this Old School approach took higher pitches. This is the ‘ethereal’, ‘spectral’ ‘bell-like’ quality that is described so often by those who wrote about these women’s voices. This approach to head voice was in all women’s voices, regardless if they sang Donizetti or Strauss. Today, this approach to the top voice has OVER-THICKENED in all women’s voices, and we rarely hear a TRUE head tone in classical music nowadays. Most dramatic sopranos now overdo these top pitches to the detriment of the instrument as a whole.

Amelita Galli-Curci, another soprano of renown, had this to say about singing instruction. I appreciate her comparison of the voice to other instruments. 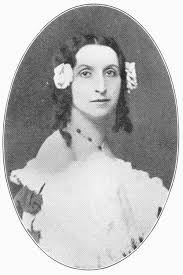 It all boils down to singing without forcing the voice…never pushing [the breath] forth. This is a universal principle of tone production. If you blow more air into a flute than the flute can hold, you get a wheezing and whistling tone. If you force the tone on a violin you begin to scratch. If you listen to Barrère you will hear a full, light quality of tone; there is no forcing it. It is the same with Kreisler or Heifetz; you have pure, beautiful sonorities, there is no suggestion of the strings, and so it should be with the voice.